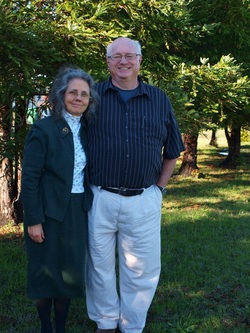 Pastor Margerison was reared in San Bernardino, California.  He joined the Marines right out of high school and spent two years of his four-year enlistment in Vietnam.  Shortly after discharge he was attending a junior college in Santa Maria where he met Susan.  After he finally talked her into saying yes to his proposal he took her to meet his family.

He has been blessed with a large and Christian family in San Bernardino.  On the Saturday where he introduced Susan to the clan they were attending a family study in the Book of the Revelation.  The teacher spent the evening teaching about the need for salvation and the urgency needed because of the soon return of Jesus Christ.  The next day in church Susan got saved.

They had been married for about a year and he was having doubts about his own salvation.  His tactful new bride told him if he did not get saved he was going to hell.  That plain truth spoken in love was what was needed to motivate him to receive Christ.  He finally went from knowing all about salvation to knowing salvation.

While attending a Baptist Church in Boulder Colorado he was called into the ministry and took his family to Jacksonville, FL to Trinity Baptist College.

After school he was the associate pastor for a church in California and went to Eureka to start a church.  From there he went to Redding to pastor Central Baptist Church and from there to Cloverdale.  He has been there since 1989 and plans to stay.

As many pastors of independent Baptist churches in Northern California he has had to work full time while pastoring.  He has driven trucks, forklifts, been in sales, was a janitor, security guard and worked at a toy manufacturer.  While doing this he has preached and taught at church and nursing homes.  He has knocked on every door in Cloverdale several times and is still working to win people to Christ.

Pastor Margerison has five children.  His eldest is married to a pastor and his youngest daughter is a Missionary in Mexico City.  He has three sons in Fort Bragg where Joshua and Daniel have started the Gospel Light Baptist Church.  Currently two of his thirteen grandkids are in Bible College.
© COPYRIGHT 2022. ALL RIGHTS RESERVED